Labolatory of Regenerative and Developmental Biology

Back to Japanese page

I am studying cell differentiations using frog embryos and mammalian pleuripotent stem cells as materials. One of the key in the differentiation of mesoderm resides in the T-box transcription factors that are transcribed early in its formation. It has been revealed that many tissue or organ formations, in addition to mesoderm formation in itself, become defective if we suppress the activities of those factors.

I am also engaged in culturing mammalian ES and iPS cells. One of the attempts include the differentiation of neural crest cells from mouse ES cells in serum- or feeder cells-free conditions. I am aiming at integrating the knowledge from frog development and mammalian cells for the better understainding of organ formation of vertebrates. 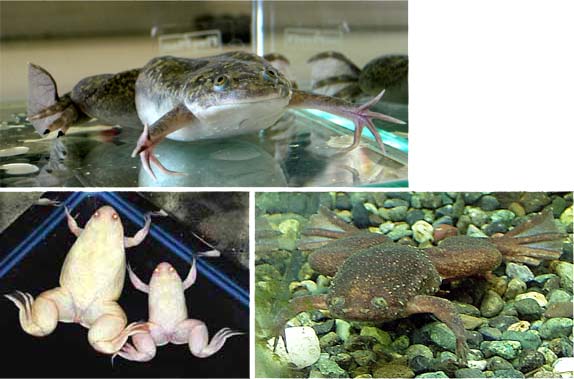 Upper and lower left photograph show Xenopus laevis. They are native to Africa, and living mostly in under water. Length from the tip of head to the cloaca is about 10 cm, and they are flat, as shown in this photo. Tree out of five fingers in the leg have nails, so they are called African clawed frogs.

Wild type (upper) have greenish black patterns, wheareas albinos (lower left) are totally white with their eyes reddish due to the blood.

Silurana tropicalis (also called Xenopus tropicalis) is a related species. Due to its smaller genome size, shorter life cycles, and availability in transgenic techniques, they are also widely used in frog research. In my impression, they seem to be fond of looking outside from the water surface with a relaxed posture.

We can obtain fertilized eggs by injecting human chorionic gonadotrophins all year. The next day after injection, they lay 1000 - 3000 eggs in a day. This property is convenient for us, considering that most other frogs lay eggs only in spring (once a year).

Albino eggs are white, and therefore most useful in such experiments as when or where a gene of interest is being transcribed.